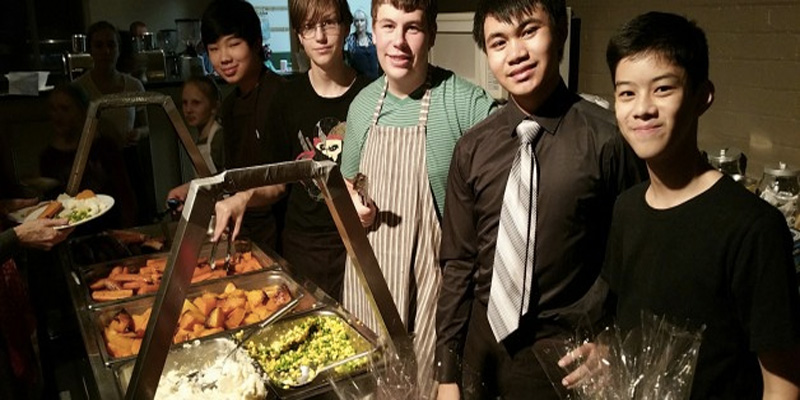 On Sunday night we were taken back to the fabulous 50’s to raise some money for the Vermont South Leo’s club, which supports causes such as Beyond Blue Youth and Cystic Fibrosis. While the Second World War had just ended and families were reunited, brothers and sisters were faced with another war at hand on Sunday night, a war against our ever tightening belt and growing bellies as we stuffed our faces with some of the greatest food to come from mamma’s kitchen. Creamy pumpkin soup, succulent roast and sausages accompanied with roast veggies and gravy.
Another war brewed at tables as a choice for dessert of either berry pavlova or apple crumble with ice cream was served as we were forced to choose between two classic desserts.

Eddie Cole provided us with some classic 50’s entertainment, one of which was Hound Dog, we conversed and ate as we listened to his dulcet tunes. His performance told us he was made for another time, a simpler one that would revere and admire a man such as Eddie.

The night was MC’d by Mike Nayna, this was most exciting when the auctioning of three hampers started. Mike was both cruel and kind in demanding bidding and getting a great result for charity. Many took part in the bidding but as with these things the highest bidder wins and we were able to raise a lot of money for the club. All in all an enjoyable night where we got to meet some of the members of the Lions club and enjoy some good food. This was a great opportunity for the Melbourne Revival Church to reach out into the local community, thank you to all who made it happen! We packed out the Dining Room at the Hall The engine room of volunteers helping out