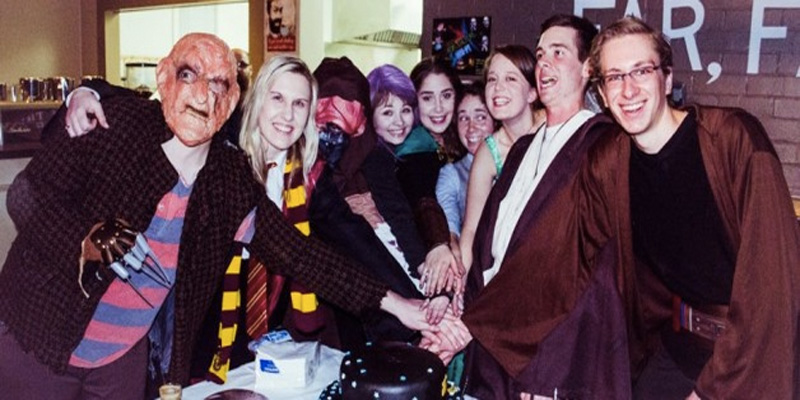 The Melbourne Youngies were proud to present the Pop Culture and Sci-Fi Fancy Dress for all the Youngies turning 21 in 2015! The theme was slightly vague… but it was at the 21sters request, so the assembly accepted the challenge and dressed for the occasion. The Youngies decorated the Box Hill hall with Star Wars in the dining room, Superheroes in the foyer and Harry Potter in the mezzanine. A huge amount of time and effort went into the night with preparations such as building and painting props, creating mood lighting and making costumes to name a few…. and the results were fantastic!

The night kicked off with food of course; we covered all of the major food groups… hot dogs, popcorn, cotton candy, and other movie foods all of which form the cornerstone of a healthy diet! The Muppets’ Swedish Chef served up grated cheese and made a huge mess which had to be seen to be believed.

We had the children’s parade next where there was a strong Frozen theme and many students from  Hogwarts School of Wizardry. All participants received a lolly for sharing the story of their costume. There were many activities and plenty of entertainment through the night; we had Wizards Chess, photo booths, a jumping castle, Colouring Corner, and Lightsaber Wars, just to name a few!

The pinnacle of the night was when we gathered the 21sters on the stage and sang Happy Birthday to them. They shared their testimonies about Gods influence and what He has done in their lives, how they received the Holy Spirit and how rapt they were to have each other. We then trotted out the Death Star piñata and watched the 21sters bash it to smithereens with their lightsabers to explode the Death Star and shower everyone with lollies!

We were thankful for the visitors from the Geelong, Morwell, Ballarat and Shepparton Assemblies who made the voyage. There were over 200 people at the event and the support was terrific! Thank you to all who worked hard to get the event up and running and to all who came along. Photo just after the Children’s Parade Families joined in the theme and did it well! This years’ Youngies turning 21, on stage with their cakes Some of the Youngies Leaders and Captains All ages enjoyed the Jumping Castle The emperor sitting in his death star There were some villains there too…