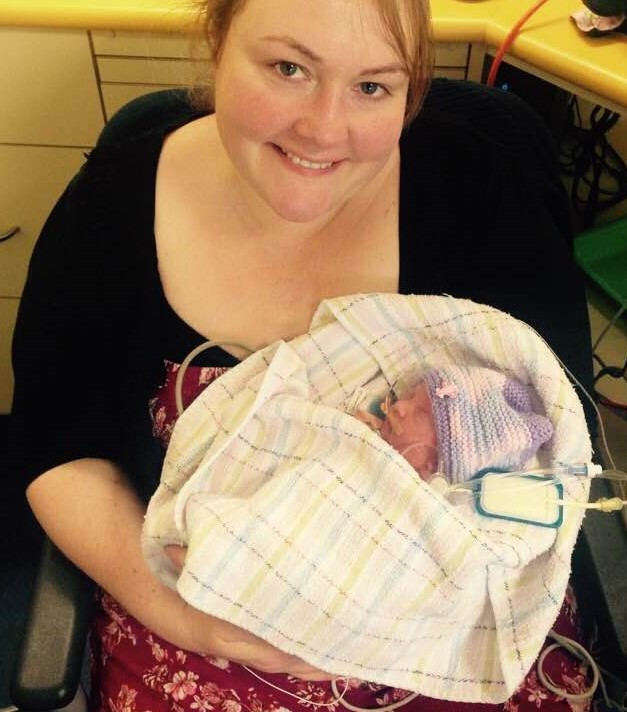 My cheeky chop daughter has turned 2! And for some reason I feel compelled to share her story. I know many parents refer to their kids as their ‘miracle’ or ‘gift’ but this kid truly fits the bill. When I was 14 I was diagnosed with Polycystic Ovarian Syndrome (a common story, I know). At this point the GP flagged that this would affect my fertility but I’m 14 so no biggy.

Sometime in my early 20’s I wound up in ED with epic abdo pain. The hospital does an ultrasound to take a look at my ovaries. The sonographer explains to me that most women who have PCOS average about 12 ‘cysts’ on either one or both ovaries. I asked how many I had. He said he stopped counting at 40 on the first and didn’t even bother on the second because it was much worse. This I’m told decreased my chances of conceiving naturally from ‘reduced’ to ‘slim – none’.

At 23 I get married. We earn money. We travel. We watch friend after friend have a baby never to sleep or have a spontaneous night out again. We wonder if we even want babies … but then on a subconscious level don’t believe we won’t. I turn 30. We decide if we’re going to do this we need to commit to it and pursue our medical options because nothing had happened naturally in our 7 years of marriage.

At the final Revival Church meeting of the year, I wander up in the prayer line. I don’t remember what I said to the Pastor who prayed with me but I clearly remember saying in my head “Lord, just letting you know, however this needs to happen, we’re ready when you are”.

In February I’m feeling unwell and worry I have a thyroid problem or cancer (seems dramatic but we’d not long lost Dad to cancer). I make an appointment at a women’s clinic that also happens to offer fertility treatment. We figure we’re already there, we may as well ask our questions about fertility options. They take bloods. We get in the car and I tell Mat I don’t think fertility treatment is for me.

A week later I get a call with my results. I brace myself for the diagnosis of death by horrid disease. Nope. Pregnant. PREGNANT! I know some will try to explain it away and say this happens all the time .. But it didn’t. For 7 years. Not until I asked one sunny Sunday.

Of course, that wasn’t the end. High chance of miscarriage. A shortened, funneling cervix. A hospital stay at 23 weeks with concerns of early labour (the baby isn’t considered viable until 24 weeks). A hospital stay and steroid injections at 27 weeks. Many more little prayers. Many more answers.

At 30 weeks she arrived. We were told she would have a number of issues, particularly her breathing. She was off CPAP within 24 hours. I was told I’d be lucky to have her home by her due date (10 weeks later). We had her home in 6. So. Many. Miracles.
Who is God? The one who answers.
Happy Birthday baby girl. My gift from God.