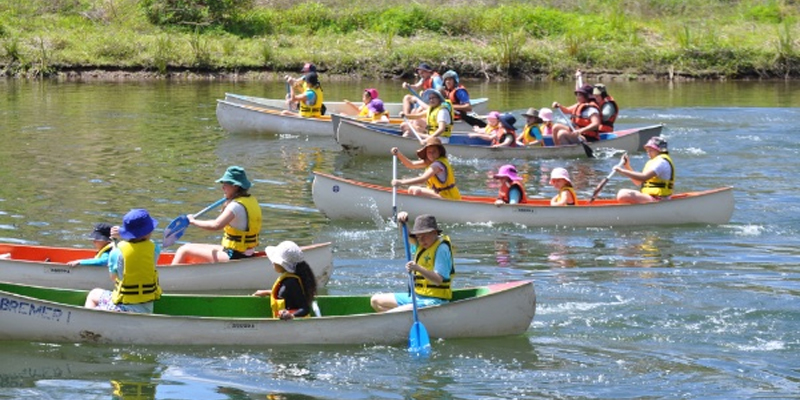 Enjoying the conditions and facilities at Allawah Scout Camp, we again returned to this venue to hold our Children’s Camp where 29 children were in attendance. The theme this year was ‘Trees’. With three teams of seven and one of eight, the team trees were Cedar, Fig, Olive and Palm. The kids presented plays on these trees and we had a few talks on trees in general and some specific ones. We rate this year’s camp as one of the best with the attitude and co-operation of all the kids of an exceptional standard.

We held the familiar range of activities ranging from craft to canoeing, including archery, Aunty Nancy’s team challenges, laying a treasure course for the other three teams (each team laid one), a maze, quizzes and puzzles for each team, a great bonfire night where people from the local area meeting area joined us for their mid-week meeting, and each team prepared and presented a play based on the tree their team represented. Performing a play about a particular tree might seem a challenge in itself, but the kids achieved this with admirable ability. They were informative and quite entertaining.

The camp site is blessed with access to Brisbane River where we can hold our canoeing events, swimming and other water activities such as the water slide, a water version of Duck-Duck-Goose, water softball, and shooting with water ‘cannons’. The team spirit and co-operation was wonderful to experience. As the ages range from 5 to 17, each team is like a family unit with the older ones being sure to support and include the younger ones, which they all did. The obstacle course (maze this year) is always the activity that unites them well as they have to rely on each other to be directed through the course.

We had a great bunch of team leaders and, of course, where would we be without the cooks who are in the kitchen by 6:30am and are kept busy through to 8:00pm after cleaning up. Starting with cereal and cooked breakfast, they also prepare morning tea, lunch, afternoon tea, dinner, dessert, and the occasional supper. Our other Jay, who works for a major bakery, also drives to the bakery every couple of days to pick up our bread supplies. So, it’s a hearty thanks to all who attended for a very successful camp.